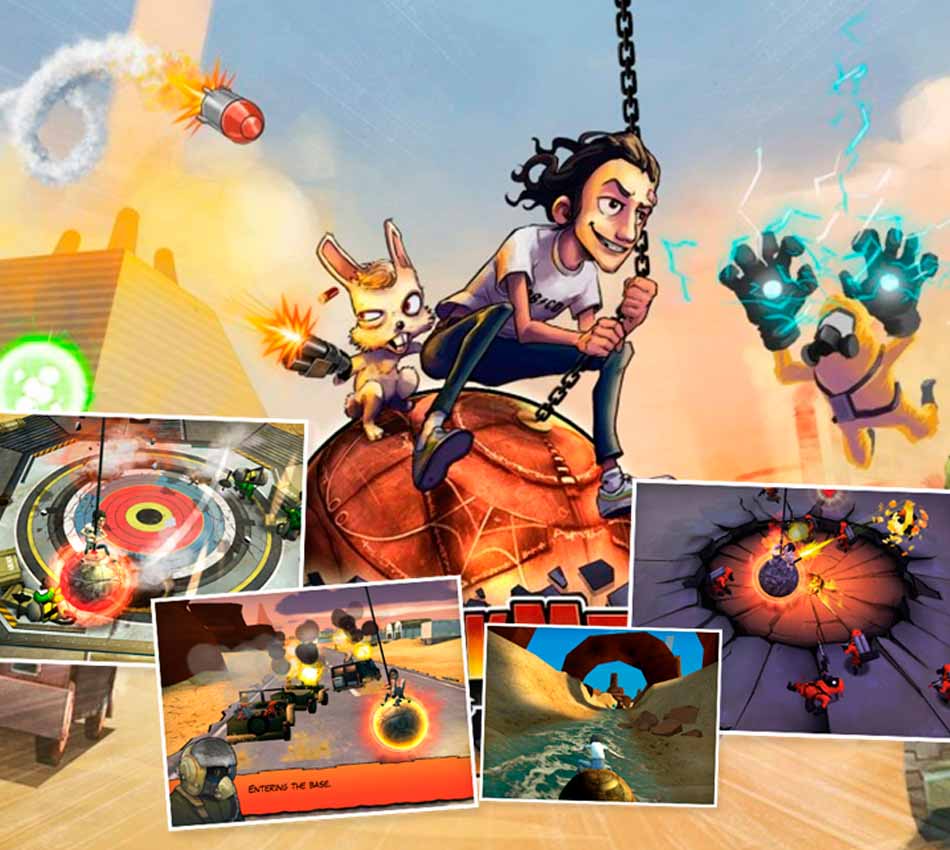 Video game development has given Digital Dive Studio the basis of our knowledge and the motivation that has driven us to the creation of our own brand. We believe playing is the best way to encourage motivation, attention and interest of any student. In addition, simulators, games and all kinds of applications can help to train employees in complex or dangerous processes in efficient and safe working conditions.

Playing and creating video games was our cornerstone for entering the 3D world and what has made the difference in our business trajectory, bringing a bit of the games created to all our projects. As a sample here you have two of those video games.

Mort and Phil, two of the most unlikely secret agents you've ever met, are the only hope to free the city from Jimmy the Freak's threat. Join them on an endless car chase, dodging the attacks of Jimmy's men, in an adventure full of excitement; with many vehicles to pimp up, extravagant weapons to blast your enemies, and hilarious costumes to enhance your character's features. A full free-to-play experience, with lots of goodies and customization possibilities.

WRECKMAN: RISE OF A HERO

WreckMan: Rise of a Hero is a wacky adventure game based on physics where you will play an antihero riding a magic wrecking ball. It is a humorous adventure game starring the unlikely hero Cornelius W.Pennignton the 3rd, known as “WreckMan” to his friends from him. A natural born loser, WreckMan, is chosen by the gods to rescue the world from a horrible fate by commanding a giant magical wrecking ball.

Edutainment (educational entertainment: games, shows and films) and the game merged in these educational projects. The use of serious games takes advantage of gamification using game mechanics in non-recreational environments and applications in order to enhance motivation, concentration, effort, loyalty and other positive values common to all games.

Educational video game for "Pharma 2.0." online pharmacy. This application is compatible with IOS and Android and it consists of 3 mini-games in which children learn to protect themselves from the sun, to combat lice and good oral hygiene habits.

Bye Bye Fears is a children's video-game for iPhone and iPad to help children fight their fears, insecurities and tantrums. Digital Dive has developed the project in collaboration with the company Fluff, creators of the game characters and psychological development that supports the project, while Digital Dive is responsible for all technical aspects such as programming, modeling 3D, animation, integration and gameplay.

The game includes four main characters, each with a unique game mechanic and three levels of difficulty. It also includes a Parent Area with tips for parents to teach their children to overcome their fears and insecurities with practical advice written by psychologists.

Most virtual reality games are based on the immersion of the player. We have taken it upon ourselves to always work in a multiplatform format, using our long history in video games, 3d visualization commissions, virtual reality and our line of products for video games or cinema created in the Digital Dive Vehicles division.

You can share this story by using your social accounts:

Digital Dive is a registered trademark - All rights reserved
We use our own and third-party cookies to analyze user navigation and improve our services. We would appreciate if you accept its use. You can change settings or get more information at following links.
Read moreAcceptCookie settings
Manage consent

This website uses cookies to improve your experience while you navigate through the website. Out of these, the cookies that are categorized as necessary are stored on your browser as they are essential for the working of basic functionalities of the website. We also use third-party cookies that help us analyze and understand how you use this website. These cookies will be stored in your browser only with your consent. You also have the option to opt-out of these cookies. But opting out of some of these cookies may affect your browsing experience.
Necessary Always Enabled
Necessary cookies are absolutely essential for the website to function properly. These cookies ensure basic functionalities and security features of the website, anonymously.
Functional
Functional cookies help to perform certain functionalities like sharing the content of the website on social media platforms, collect feedbacks, and other third-party features.
Performance
Performance cookies are used to understand and analyze the key performance indexes of the website which helps in delivering a better user experience for the visitors.
Analytics
Analytical cookies are used to understand how visitors interact with the website. These cookies help provide information on metrics the number of visitors, bounce rate, traffic source, etc.
Advertisement
Advertisement cookies are used to provide visitors with relevant ads and marketing campaigns. These cookies track visitors across websites and collect information to provide customized ads.
Others
Other uncategorized cookies are those that are being analyzed and have not been classified into a category as yet.
SAVE & ACCEPT
Powered by